More companies are considering to invest in Vietnam in recent years as globlal investment circumstance changes. Vietnam topped the fastest growing economies in the world for many years and surpassed China in 2018. The country is forecasted to surpass Netherland and Australia as the top 20 world largest economies in 2050.

Vietnam is now transforming from frontier market to emerging market and under reviewing by MSCI. Vietmamese government made huge efforts to push up its economy as well as upgrade standards fulfilling with global investment standards. It is expected that Vietnam will go into emerging market in upcoming years.

Vietnam, a Southeast Asian country, has population of 93.7 million people and occupies about 331K square kilometters. The S-shaped country has a north-to-south distance of 1,650 kilometters with a coastline of 3,260 kilometters. 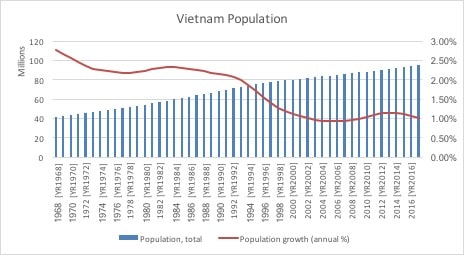 Vietnam GDP reached at 224 billion US$ in 2017, increase of 6.8 percent compared with its GDP in 2016. The country's economy topped top 20 world fastest growth rate economies in 2017. The average GDP growth rate of Vietnam in recent 10 years was above 6 percent. World Bank forecasted Vietnam economy will reach at 239 billion US$ in 2018 or equivalent to the increase of 6.8 percent YoY. 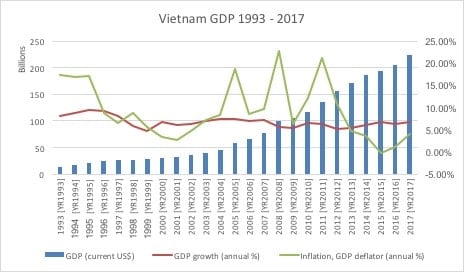 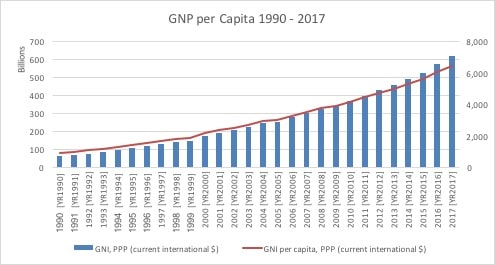 According to Foreign Investment Agency (FIA), a member of MPI, there were 24,397 foreign investment projects during period 1988 - 2017 with total registered capital of above 312 billion US$ in which relized capital was about 169 billion US$, details as follows:

Vietnam economy relied heavily on foreign investments since 1990s. Investment from FDI companies always accounted for 25 percent of country's investment, and contributed above 25 percent on Vietnam GDP. Further more, exports from FDI sector reached at 155 billion US$ in 2017 or equivalent to 72.6 percent of country total exports. Due to important role of FDI investors in the country's economy, Vietnamese government maintains continuosly its best efforts to propose competitive regulatory environment for calling foreign investment to Vietnam.

Thus, foreign investors can acquire huge incentive policies depending on their nature of business and locations willing to invest. Investors take major benefits when investing in Vietnam, including:

Tax incentive (CIT and PIT): As stipulated in current laws and decisions issued by local councils, foreign investors might get benefits from tax incentive policies when investing in Vietnam both inside or outside industrial zones or processing zones. Investors are offered to get tax exemption, tax reduction, and incentive tax rate for whole project life depending on investment sectors and locations.

The most incentive policies on tax are now under reviewing for investment projects invested in special economic zones (SEZs). This is the biggest changes on foreign investment circumstances in Vietnam ever in which Vietnam government proposes tax exemption for both companies and individuals upto whole life of projects. SEZs law stipulates some sectors sujected to tax exemption for whole life while others might sujected to tax exemption upto 30 years. Both companies and expats are covered by this law.

Land price incentive: Investors normally get leasing discounted rate from 50 percent to 100 percent in first years. However, a crucial element of SEZs law is mentioned about leasing exemption when investing in SEZs. Many sectors are proposed to subject to leasing exemption upto 30 years. Investors, thus, should take seriously awareness about sectors they are considering to invest to get the best benefits.

Labor force: In late 1990s and early 2000s, Vietnam was seen as cheap labor force country. However, as fast major changes in minimum wage policies, the country's labor cost does not cheap any more. Although minimum wage increases at 10 times compared with its in 2005, labor cost in Vietnam is still competitiveness even less than before. Despite of some disadvantages, Vietnam is still considered as a country with abundant human resource and skilled workers.

Land lease life: As the moment, foreign investors only acquire land within 50 years, except special cases which can be extended to 70 years. However, a proposal on SEZs law is now supposed to extend leasing time upto 99 years for projects invested in SEZs. It would be a great success of invetment promotion in upcoming decades with these competitive regulatory.

Consumption: As populous country, Vietnam is a perfect destination for investors investing in wholesales and retails sector. In recent years, many world largest conglomerates such as Central Group, AEON, Lotte, TCC Holdings, Thaibev, JX Nippon Oil, Alibaba, Tencent, and Idemitsu, invested in wholesales and retails sector through acquiring local firms. Some sectors such as super market or e-commerce are now dominated by foreign companies.

Free Trade Agreements (FTA): Vietnam has been involved in 16 FTAs upto now. As the risk of trade war between USA and China, many investors are now moving their factories out of China due to awareness of trade war. Looking at countries nearby China, Vietnam has a lot of advantages, especially in taking benefits from involving in 16 FTAs. For example, investors operating in textile sector registered many projects before and after CPTPP signed. They expected to get huge incentive tax when exporting products to CPTPP members.

In overall, Vietnam is a potential destination for investment in upcoming decades. NMK LLC helps investors to discover great potential investment opportunities in Vietnam. For more details, please contact us at ic@nmkin.com or call to +84 33 7572 999 for supports.